I'm based in the UK. I have a OneMesh network set up using an Archer VR600 and two separate V3 TL-WPA8631P Kits. Using any WiFi device, I can roam between the areas covered by the two TL-WPA8631P units perfectly, and my WiFi stays connected, switches seamlessly, and works beautifully. However, if I move to the area covered by the VR600, the WiFi indicates it has a full signal, but all connectivity stops. If I stop & restart my WiFi on the device, it connects and works perfectly, but then connectivity fails when I try to roam back into an area covered by either of the TL-WPA8631P units.

The web interfaces on both the TL-WPA8631P units state that they are both part of the OneMesh network, the VR600 also says that it has them both in its OneMesh network.

Everything is running the latest firmware.

What do you advise please?

Edit: I had to restart everything, as I had some work done on my house. Seamless routing worked for for a day or so, then failed again. Thankfully I was able to run some tests as it was all happening. It appears to be an internal routing issue, probably from the VR600.

If I disable then re-enable wifi on my device, & re-connect within the area covered by the VR600, I can still only ping my Router and 8.8.8.8, but none of my Servers or the Printer.

If I move the Printer Ethernet cable away from TL-PA8010P_1 and plug it directly into the VR600 & the repeat all of the tests, when I roam to the area covered by the VR600 Router I can now ping my Router and 8.8.8.8 and the Printer.

This would appear to indicate that the VR600 Router isn't routing to the PowerLine network via TL-PA8010P_2, but can route to anything that it has directly connected to its Ethernet ports and to the WAN/Internet.

This all seems like I can replicate it easy enough, so what would you like me to do to help fix it?

TP-Link have given me a firmware update for the VR600 which appears to completely fix the problem. I'm testing it at the moment, but I'm sure that as soon as we've proved that it is stable, they will post the link up here.

A huge thank you to the TP-Link team. I couldn't have asked for more.

However, whilst all of the above is happening (when I roam to the area covered by the VR600 Router I can now ping my Router, 8.8.8.8 and the Printer - but none of the internal Servers connected via the PowerLine network), I can do one thing that resets everything & makes it all work...!

If I unplug the Ethernet cable that connects the TL-PA8010P unit to the VR600 Router, count to 5 then reconnect it, suddenly I can ping the all of my internal Servers, the Printer, and 8.8.8.8 again (without moving or reconnecting my test device).

Hopefully this will help to pinpoint the problem.

Note: I had to enable Lower-PLC-to-VDSL Interferance Mode as without it my VDSL Internet connection wiped out completely. Power Saving is disabled on both TL-PA8010P units.

@JustinSB Thanks so much for sharing all the detailed info, this issue you are experiencing sounds unusual. To address the issue and try to fix it, we would like to have a specialist look into this further via email. Please check your mailbox later, and let us know if the issue is resolved. Thank you!

Here is a network diagram of my house. I simplified things a little to see if it helped, but it didn't. The OneMesh network can be divided into three zones, where each zone has the WiFi coverage provided by either one of the two TL-WPA8631P units or by the VR600 Router itself. Each of these is also connected via the PowerLine network, and each node on the PowerLine network has various bits of kit hardwired into it via ethernet cables. My office is Zone 1, at one end of the house. My Wife's office is Zone 3, at the other end of the house. In the middle is the Sitting Room. Each zone also has various bits of kit that connect via WiFi, such as phones or laptops. The File Server in Zone 1 is also the DNS and DHCP server for the entire network.

The OneMesh network in Zone 1 & Zone 2 can reliably route IP traffic via the PowerLIne network to the File Server. However, if I roam into Zone 3 on the OneMesh network, I can no longer route any IP traffic to anything connected via the PowerLine network in Zone 1 or Zone 2. If I leave my phone where it is, & go & unplug/replug in the ethernet cable that connects the TL-PA8010P PowerLine unit with the VR600 Router, suddenly all IP routing works & my phone can ping everything again. If I turn off the WiFi on my phone, then turn it back on again, all IP routing will also work again, & I can ping anything in Zones 1, 2 or 3, along with anything on the Internet. However, having connected to the OneMesh network in Zone 3, if I now roam back into either Zone 1 or Zone 2, once again I lose the ability to route to any device physically hardwired into the PowerLine network.

Sometimes, if I wait for ~10 minutes, it will "recover" & I can route to the entire internal network again, but sometimes it will never come back - until I disconnect/reconnect my WiFi connection or unplug/replug in the connection between the VR600 and the PowerLine network.

TP-Link support have escalated it to one of their senior engineers, who I have emailed & who is looking into it all for me. However, to me, it would appear that the OneMesh routing algorithms and the PowerLine routing algorithms aren't playing nicely together, so it would seem that this will need a firmware fix in one or more bits of the TP-Link kit. Anyway, I thought that if I clarified my exact setup, & laid it out so that anyone could see how it all connects together, that it might help anyone else on the forum who is having similar problems when they are trying to use TP-Link's PowerLine technology alongside the new OneMesh system. 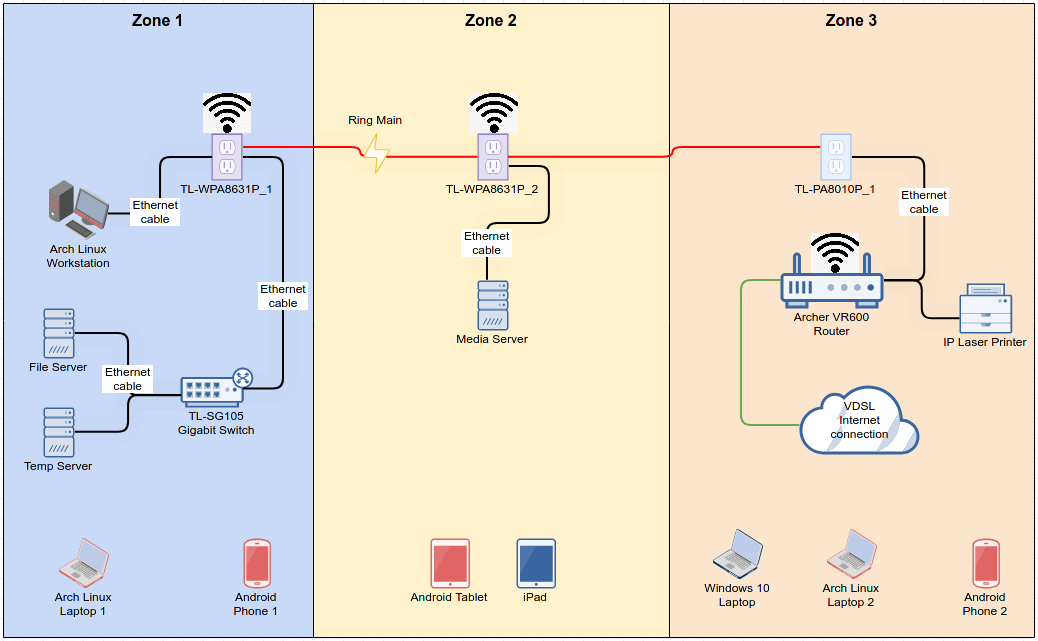 the issue most definitely still isn't resolved, but I have managed to do some more testing. A week ago I emailed some further information to the Senior TP-Link technician who contacted me, but I’m still waiting to hear back from him as to what we need to do next.

In the meantime, the problem has new become almost permanent. As I walk into my house, the nearest WiFi source for my OneMesh network is the VR600 Router. Unfortunately, the VR600 is the closest source to my bedroom too. Most of the time, the VR600 cannot route to anything hardwired to my internal PowerLink network. As this includes my DNS/DHCP server, obviously nothing works. However, at this point & without touching anything else, if I unplug/replug the TL-PA8010P that connects the VR600 with the rest of my PowerLine network, everything starts to work. This made me wonder if it was the TL-PA8010P that was faulty. To test this, I ran a long Ethernet cable from the VR600 to one of the network ports on one of the TL-WPA8631P units. Interestingly, the symptoms remained exactly the same. To me, this means that the problem is on the VR600 router. The link to the Internet doesn't ever drop, as I can always ping 8.8.8.8, I just can't reach my internal network if I connect to the OneMesh network through the VR600 Router itself.

The VR600 appears to have some serious routing issues. If I connect to my OneMesh network via the VR600, I can ping my IP Printer, which is plugged into the VR600 via an Ethernet cable to one of its gigabit ports. However, I can’t ping my File server, connected via the PowerLine network through the TL-PA8010P  (TL-PA8010P is connected via Ethernet cable into the second gigabit port on the VR600). I can’t ping the IP Addresses of either of the TL-WPA8631P units that provide the other two WiFi sources on the OneMesh network, and which are also connected via the PowerLIne network, but I can ping 8.8.8.8 out on the Internet. If I then walk back to the other side of the house, & connect into the OneMesh network via either one of the TL-WPA8631P units, I can ping every device on the internal LAN, the VR600, the IP Printer & 8.8.8.8 out on the Internet.

Because I had identical symptoms and ping test results when I connected the VR600 to the PowerLine network via either the TL-PA8010P or the TL-WPA8631P, I think that we’re fairly safe to assume that everything points to the VR600 as the source of the problem.

My family is really unhappy, because our wireless internet access is unusable. I'm having to explain to my wife, who is an accountant, that the brand new & rather expensive WiFi and network system that is currently stopping her from being able to do any work at home will be OK at some point in the future, when the manufacturers fix it especially for us, & that I haven’t wasted hundreds of pounds on a pile of junk. So it’s all a bit tense at the moment. Naturally, I’m rather interested to hear what TP-Link are doing to fix it.

Thank you for your time for providing more case details and your analysis on this issue.

Our seniors are looking into this issue now and working on the solution. If there is any update, we will let you know via email in first time. Thank you for patience.

The Senior Support people & the R&D department are building an identical setup based on my specs above so they can see exactly what is happening with the routing. That's one of the many reasons why I use TP-Link kit...! Because the support is fab :-)

TP-Link have given me a firmware update for the VR600 which appears to completely fix the problem. I'm testing it at the moment, but I'm sure that as soon as we've proved that it is stable, they will post the link up here.

A huge thank you to the TP-Link team. I couldn't have asked for more.

@JustinSB Glad to hear that the Beta works! Thank you for contribution to the  solution of the problem.

Feel free to let us know for if there is any update.

@Solla-topee unfortunately, the latest firmware (Archer_VR600(EU)_V3_210826) on the VR600 breaks all of this again, so I have had to revert back to the Beta version that you listed above. Very disappointing, but at least I have something that works.

Hello @JustinSB  thank for the information. I'm not sure if new firmware contains this fix , I suggest you replying support email TKID210704361  to communicate with our seniors about this concern directly. Thank you.