We have some huge news for everyone regarding our Kasa platform! TP-Link has released a completely redesigned version of the Kasa app, bringing much-requested features and quality-of-life upgrades. (**cough*moresmartactions*cough**).

We recommend that everyone update their application from either the google play store  as soon as the update is available to them so that you can take advantage of the new features as soon as possible. Once you update your TP-Link ID to use the new application, you will be prompted on other devices using the same TP-Link ID, to also update their applications to take advantage of the new features.

The team has already had the opportunity to test the functionality of the new app to get acquainted with the new features and to test the overall stability of the app over the last few weeks. Below are some of the main features that we thought we should share with our users first.

If you find any added functionality for your devices or smart home not included below, leave a comment so that other users can find the feature in their app.

While Smart Actions were one of the most powerful features in the Kasa Application, it also had the most limitations placed on it, such as limiting the number of active actions to 3, This was always one of the hottest topics amongst our users, and we are now glad to announce: The Limit of Three Smart Actions Has Been Removed! You can now create as many smart actions as you need to automate every inch of your house.

We look forward to seeing how Kasa devices can be used together to create a truly smart home!

The Kasa Application will not allow you to sort your devices into Multiple Homes. This has been a long-requested feature from our users that have devices in a second physical location, whether it be an office, second, home or even a loved one’s house that you care for.

Note: If you were using two different TP-Link IDs to control your devices, now is the time to change to one account. (Just make sure to unlink your devices from your current TP-Link ID to ease the setup process.) 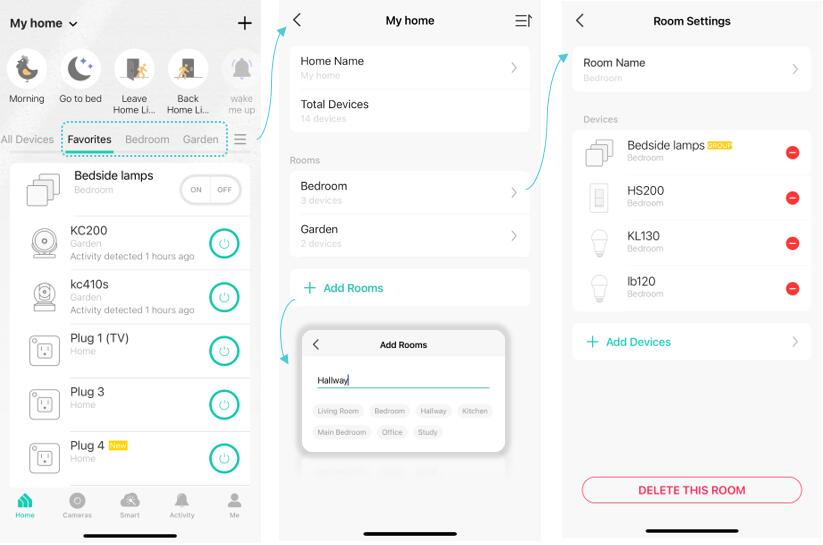 Introduction of Rooms within Individual Homes for Device Sorting

Users with devices across their entire house have always expressed how difficult it was to group and control lights for one group/room of their house at once. The new Kasa App now allows users to place their devices into separate rooms, for each separate home. 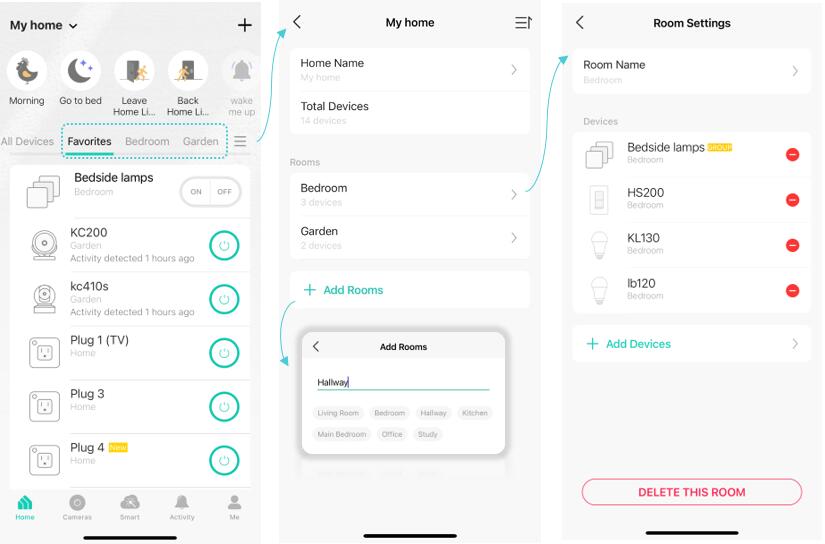 These rooms will appear as a separate tab on the main screen, providing a designated place to control the devices for one room.

Gone are the days of naming your devices with a prefix to sort devices by room.

TP-Link Pro Tip: You are now also able to change the order of device types in the Edit Menu at the bottom of the screen. You can now make your lights, cameras, plugs or switches appear at the top of each room.

If you have multiple Kasa Smart Cameras in your home, the new Kasa application has included a quick access screen where feeds from all active cameras can be seen at once.

If you have ever wondered, why is that light on? You can now find the answer to your question in the device and activity history pages of the new Kasa App. This will allow you to trace what automation triggered a device to act or can help you keep track of the automations throughout your Smart Home.

With the revived focus on home automation and Smart Actions, the application also ships with a new method of configuring Smart Actions and Routines.

When creating an automation from scratch, the application now embraces a When and Then method for creating automations. We hope that this format will be more familiar to our users and will allow users to easily see what devices can operate as triggers and which can operate as actions.

If you would like to use the older flow for creating Automations, where a device is first selected, you can do this by creating a Smart Action based on one of the featured actions. These featured actions allow for automations to be quickly created based on templates for common situations

With all the different options that the new system introduces, we look forward to seeing how our users find ways to automate their homes.

The Timer for the AutoOff Function for Smart Devices has been increased from 180 minutes to up to 24 hours.

Manual Sorting of Scenes and Devices By Product Category

After Kasa Smart app was updated in the Apple App store to v3.0.0, all Scenes and Smart Actions have stopped working. Note that all devices (smart bulbs, smart plugs, cameras) can still be controlled (switch ON/OFF etc.). When you select any Scene, the message "Network is unstable. Please try again later." appears after a few seconds.

As I mentioned before this happened immediately after the update to v3.0.0. Everything was working fine in my home for years with Kasa.This happens both from my iPhone (running iOS 16.0.2) as well as my iPad Pro (running iPadOS 15.7). 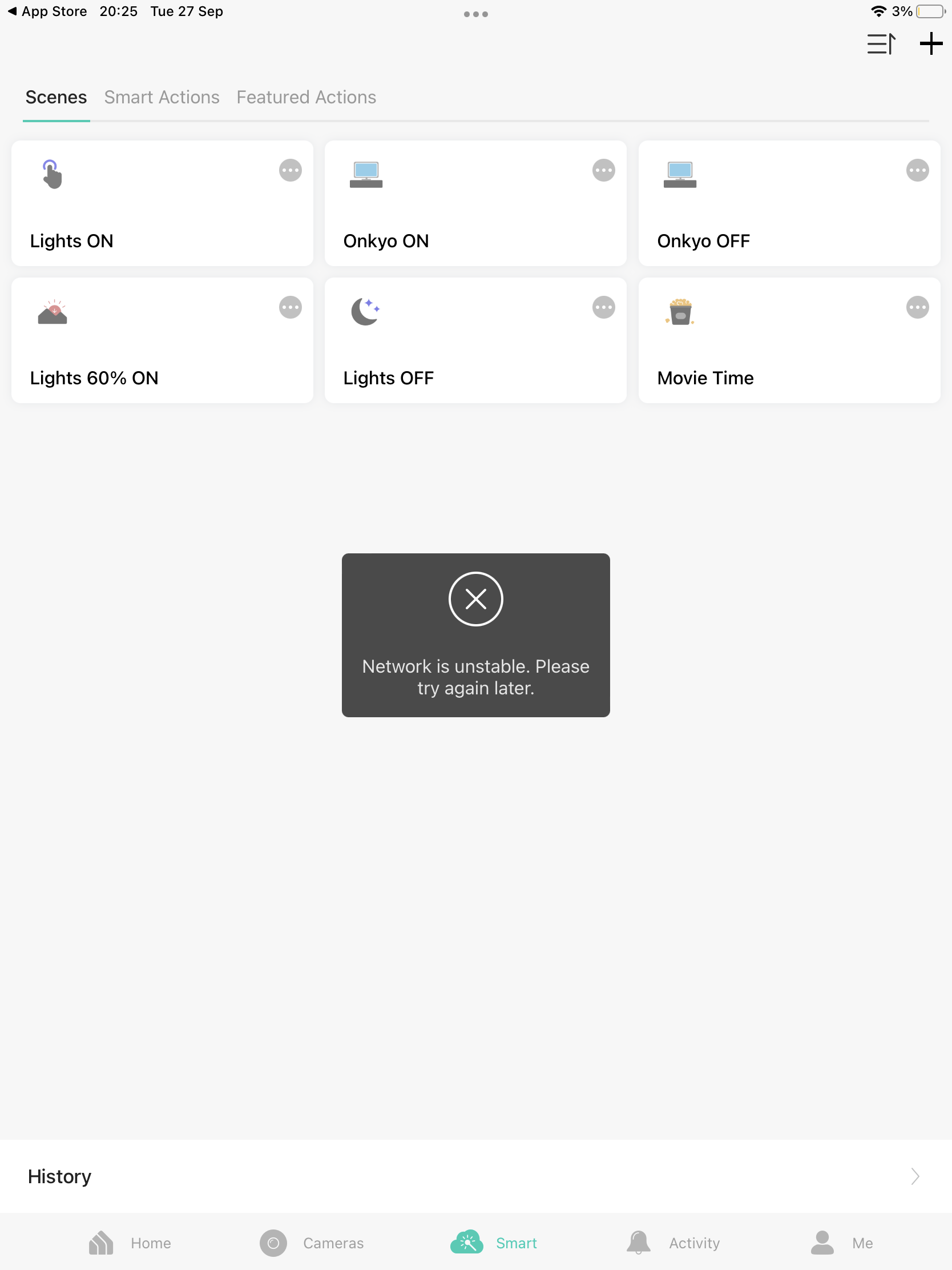 I found you are also reporting this issue in our US community from the below link, and Riley has replied to you earlier, can you please check if his suggestions work?

Regarding the second issue, we also published a solution in the following link, please check:

Failed to update to Kasa App 3.0 on Android

Please let me know if both can be resolved. Thank you very much.

As of today, the problem persists on iOS devices. Since I am not in the office today I cannot test on my colleagues Android devices.

Hi - with the new app when I try to move a device to a newly created room, it doesn't move to that new room - am I missing something?

Thank you for the case report! Would mind Starting a New thread and detailing the concern, and we'd be happy to take a further look at it. May I know do you use an Andriod or IOS phone and what is the current OS version, the app version.  You may include a photo or video of the phenomena. Thank you.

Make sure your Kasa app is the latest version.

To better assist with your case, we create a support email TKID221041339, please check your inbox~