How to disable microphone on Kasa Spot KC105?

I'm trying to stop the KC105 from sending sound along with live video (that is, I want it to ONLY broadcast video).  Several household members have access to the camera to view a portion of a room, but they shouldn't be eavesdropping on sound.

The Kasa app (Android) doesn't appear to be able to shut off the live sound.  I looked in the forums here and in product reviews, and nobody has found a way to do that. Many people, consequently, are saying they're unhappy with the Spot series of devices.

So, how do I shut off live sound?

And if there's not a way to do it via sotware or an app, how do I shut it off in the hardware?  For example, where is the microphone located on the KC105?  I'd be happy to put a drop of glue in it or cover the mic with tape. 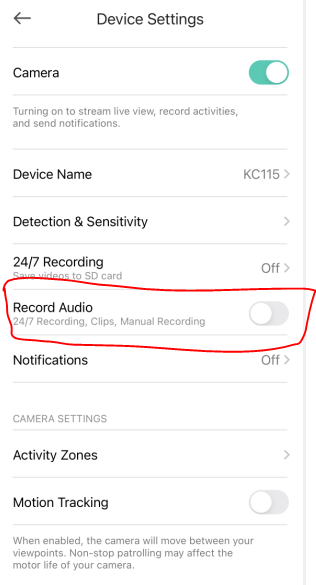